Expo about Antoni Gaudí in Moscow – open until 10th September

The Moscow Museum of Modern Art sponsored by jewelery brand TOUS present the expo “Antoni Gaudí. Barcelona”. The project aims at tracing the artistic journey of Antoni Gaudí (1852-1926) through his major architectural achievements while revealing the influence of his work on contemporary culture.

Antoni Gaudí, one of the most famous figures of Catalan culture and world architecture, spent over 40 years designing the Temple of the Sagrada Familia, but he designed many buildings, most of them in the city of Barcelona.

Man of faith, observer of nature and great architect, he has become a universal figure of modern architecture. His contribution to the discipline was a break from the established order, as much in form as for the structure and constructive solutions found in his buildings, a result of his own, unique and unprecedented methodology

Antoni Gaudí’s first exhibition in Russia is held to coincide with the 165th anniversary of the architect’s birth. The exhibition in MMOMA is complemented by a piece by a contemporary Catalan artist Frederic Amat who is rightly considered a successor of Gaudí’s tradition in the field of media art. 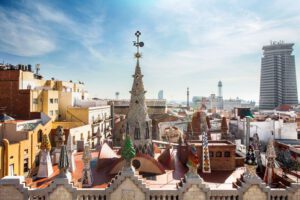