“Louis Comfort Tiffany: Treasures from the Driehaus Collection” at Georgia Museum of Art – from February 1st

Tiffany produced many stained-glass windows, floral vases, lamps, and accessories. The objects are from Chicago’s distinguished Richard H. Driehaus Collection, and highlights works never before presented in a comprehensive exhibition.

When Tiffany died in 1933, his obituary in the New York Times counted him “among the best known of American artists.” Tiffany’s technical expertise in a wide variety of media enabled him to convey his awe of the natural world through a range of objects, from common household items to one-of-a-kind masterpieces. He earned international acclaim for his artistic output, receiving prestigious awards in exhibitions across Europe and the United States. His work was enthusiastically collected by art museums and private collectors throughout his career and continues to be highly sought after today.

Although best known for his work in glass, Louis Comfort Tiffany worked in nearly all available media in the late 19th and early 20th centuries. This celebration of his works features more than 60 objects and spans more than 30 years of his career. The exhibition focuses on Tiffany’s stained-glass windows, floral vases, lamps and accessories through objects from the Richard H. Driehaus Collection (Chicago, IL), highlighting works never before presented in a comprehensive exhibition.

To read the full press release of the exhibition, CLICK HERE.

Tiffany was born in New York City on February 18, 1848, and began his career as a painter, studying at the National Academy of Design in New York City. Around 1875, he became interested in glassmaking. He preferred to use inexpensive materials because their impurities resulted in the effects he wanted and eventually opened a glass factory to create his own material. In 1894, he patented the term “favrile,” from the Latin word “fabrilis,” meaning handmade, to describe the iridescent blown art glass he was producing. While the quality of Tiffany glass made this medium the most significant of his career, he continued to innovate, expanding his operations into enamels, pottery and jewelry. Notwithstanding his accomplishments, he gave a modest answer when asked about his work: “If I may be forgiven a word about my own work, I would merely say that I have always striven to fix beauty in wood or stone or glass or pottery, in oil or watercolor by using whatever seemed fittest for the expression of beauty; that has been my creed and I see no reason to change it. It seems as if the artists who place all their energies on technique have nothing left over for the more important matter — the pursuit of beauty.”

Despite the success he experienced in his many interrelated businesses over his long career, Tiffany’s work went out of vogue with the advent of modernism, as the influence of art nouveau waned. The mid-20th century brought his work renewed appreciation, and it continues to be associated with unparalleled quality and beauty to this day. Annelies Mondi, the museum’s deputy director, is serving as in-house curator for the traveling exhibition organized by the Richard H. Driehaus Museum and toured by International Arts & Artists, Washington, DC. 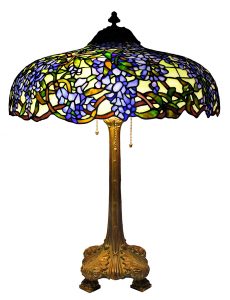 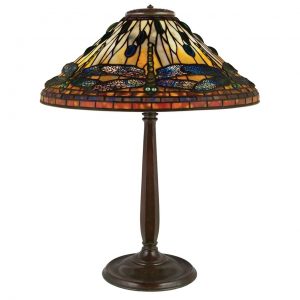 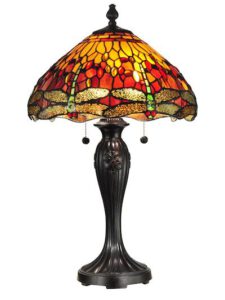