Palazzo Castiglioni is a must-see in Milan

Palazzo Castiglioni (1901-1903) is a grand palace in the Liberty style in Milan and the masterprice of Giuseppe Sommaruga (1867–1917). Its floral elements are combined with classical structures, as in the grandiose atrium.

It was a palace built for a wealthy local businessman who wanted the building to reflect his status, its interiors are richly decorated. It was remodelled as an office complex in the 1960s, meaning that most of the original interiors are gone, but it’s still possible to admire the alluring exterior.

Since the very inauguration of the palazzo the two female statues, created by the sculptor Ernesto Bazzaro, which decorated the entrance caused heated controversy because they were naked. Despite representing peace and industry, they became the subject of ridicule forcing the owner to move them to another location.

The rusticated blocks of the basement imitate a natural rocky shape, while the rest of the decorations are inspired by 18th century stuccos. The building is now used as the seat of the Unione Commercianti di Milano (Traders’ Union of Milan). The headquarters of Confcommercio is located in corso Venezia 47.

We recommend you to visit it with our private tours or to organise a event there with our B2B services because it is a fine example of Liberty Style, the name of the Art nouveau movement in Italy. By chance, or perhaps for provocation, it lies right in the middle of Corso Venezia, characterised by Neoclassicism’s sober lines.

Giuseppe Sommaruga was the most important architect of the Liberty Style and lived 50 years which was not a short life at that time of history if we consider that since 1900 the global average life expectancy has more than doubled.

Sommarga was the pupil of Camillo Boito and Luca Beltrami to the Brera Academy in Milan. His monumental architecture exerted some influence on the futurist architect Antonio Sant’Elia.

The second must-see art nouveau building in Milan is Casa Galimberti and there are many other to see. We organise four Art Nouveau private tours in Milan (link). We want to share with you some pictures from the Palazzo. 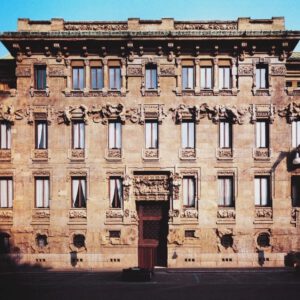 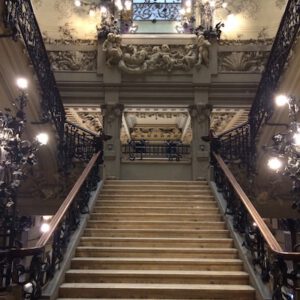 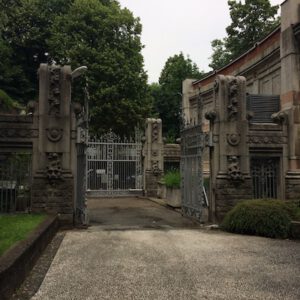 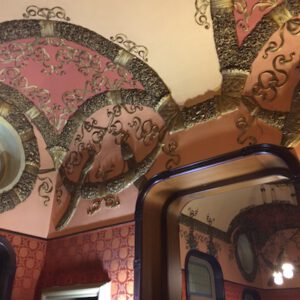 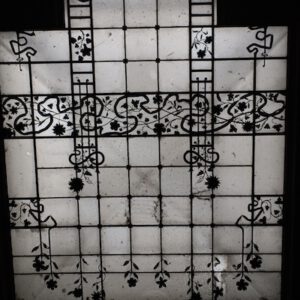 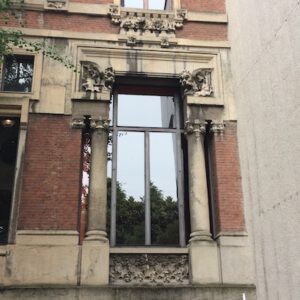 Art Nouveau is not only an art of architecture, it influences design and all other elements of the building. See details from Palazzo Castiglioni: 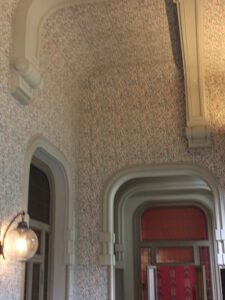 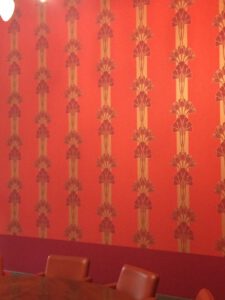 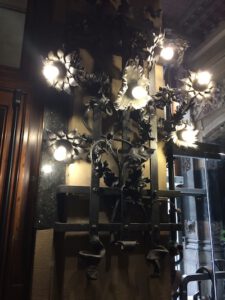 If what you are looking is not a private tour but a rental of an elegant room for a meeting or event, at Artnouveau.club we can help you organise it as well.

We can help you hire different meeting rooms at Palazzo Castiglioni, each of them with different characteristics and sizes. The first floor is more modern, technical and suitable for large numbers, while the second floor contains smaller original Art Nouveau rooms with a scenic veranda overlooking the internal courtyard. The rooms accommodate from 20 to 500 people. The structure is completed by a garden, which is accessed from the veranda, where outdoor events can be held.

This style is expressed in different forms especially in architectural works. It is particularly applied to private residential residences (palaces, villas) often with an access of decorative elements, in which linear or floral motifs prevail.

In Italian cities, where high-bourgeois residential construction had developed a lot, one can still see Art Nouveau neighborhoods today: in Turin, Rome, Palermo, Bologna, Florence and in the seaside cities, such as Pesaro, where at the beginning of the twentieth century, the elite fashion of spending the holidays began.

One of the most authoritative names of Italian Liberty is that of Ernesto Basile (1857-1932) from Parma, author of elegant villas in the Sicilian capital and of the tower of the Municipality of Ispica (Ragusa), in which architectural features of the Romantic Norman can be recognized. In the most successful works, the volumetric and decorative aspects, of a floral type, blend with happy balance, giving rise to the most significant examples of Italian architectural Liberty.

In Rome, an entire neighborhood takes the name of his architect, Gino Coppedè (1886-1927), and has all the most eclectic, that is, the most mixed, characteristics of the style.

The fashion of attending spas to heal the body, rest and participate in the life of the world, led to the expansion and embellishment of these health establishments.