The popular Belgium Art Noveau “Glassmaker’s House” in Rue du Lac 6, Ixelles is under renovation and not fit for habitation. This private house has circular windows, super stained glass and a lovely 2nd-floor balcony. The house has a monumental staircase Art Nouveau frontage, running along a very large stained glass window, occupying a large part of the facade, composed on the floral theme of Thought. 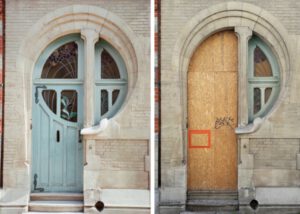 Ernest Delune built this striking Art Nouveau house for Gruner Sterner, a Viennese craftsman who specialised in stained glass windows, and he himself worked on the beautiful stained glass on the door and façade. Working in a studio at the top of the house, Sterner designed beautiful Art Nouveau windows for several of Delune’s houses in this neighbourhood.

The condition of an Art Nouveau house in the Ixelles Ponds district has worried heritage lovers for many years. Classified since 2003, the building  was designed by the famous architect Ernest Delune between 1883 and 1902 (or 1904 according to other sources).

The magnificent door has been replaced by a wooden board but its original design will be visible as soon as by October 2019.  The owners of the building will carry out work inside the house under the guidance of Brussels Cultural Heritage.

Compared to other European capitals, Brussels may be a small city, but that doesn’t stop it from being the center for a number of architectural Art Nouveau wonders. It was the home to prominent architects that pioneered the ornate style, it would come as no surprise the capital hosts its fair share of beautiful Art Nouveau buildings.

Appreciate the beautiful stained glass that is full of flowers. Done by the Austrian Gruner Sterner it is a pure work of art: 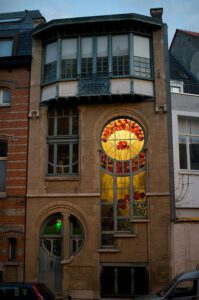 It is an achievement of the famous architect Ernest Delune, known for being the architect of Villa Le Château (86 Franklin Roosevelt Street).

The building has the distinction of having been built in two phases and therefore to have two very different facades. A first half of the house, eclectic style, was built in 1893, its facade overlooks the rue de la Vallée No. 5. The second half, of art nouveau style, erected in 1902, the most original, overlooks No. 6 rue du Lac.

The project consists mainly of renovating the interior rooms in order to make them habitable as quickly as possible, including the reconstruction of the old stairwell of the rue de la Vallée based on the model of the staircase of the neighboring house, rue de la Vallée, built at exactly the same time and also by Delune.

Owners should move in October. The house will not be empty anymore. On the other hand, the subsequent restoration phases (including the restoration of the Art Nouveau stairwell, rue du Lac) will be spread over time for budgetary reasons, with some regional subsidies still to be liquidated. The house was initially built in two phases – between 1893 and 1902 – by architect Ernest Delune, the Art Nouveau house located at number 6 Avenue du Lac.

As part of the work the door will be restored and will be put back in its original place in the next few months. Roofs and frames will also be renovated. The imposing art nouveau staircase that decorated the interior of the house will be preserved.