Alphonse Mucha’s Slav Epic collection has finally found a permanent home in Prague. The City Hall has approved that these fantastic works will be exhibited permanently inside Lapidarium, a 19th-century Art Nouveau building that has been abandoned for decades. The new gallery is set to cost around 22 million Euros and open by 2021.

Mucha said in his testament that he wanted the allegoric cycle of 20 paintings depicting Slav myths exhibited in Prague with the condition that the city would build a home for the work, something that so far didn’t happen.

The giant Slav Epic series by Czech Art Nouveau painter Alfons Mucha has finally secured a permanent home after 90 years in temporary depositories, including a hiding place from the Nazis under a pile of coal. Over the years, more than a dozen places were suggested for the Slav Epic amid disputes between Prague and Mucha’s family.

Pending its installation at the Lapidarium, the entire work will be exhibited at City Hall, itself an Art Nouveau building, to mark the 100th anniversary of Czechoslovakia’s birth.

Last summer we were were told that Mucha’s Slav Epic would be shown in Prague’s Municipal House in 2018. This may happen, but in a temporary basis, until 2021 when the Lapidarium is ready for the exhibit.

The paintings are now stored in the gallery’s depository after being exhibited during two months of 2017 in Tokyo, in a successful show where they were visited by more than 662,000 people. Some cities in the United States, South Korea and China expressed interest in displaying the Slav Epic but the local pressure for the return of these works was stronger than the . However, the paintings will not be sent to another exhibition abroad soon.

Mucha began the Slav Epic in 1910 and completed it in 1928, 10 years after the former Czechoslovakia became independent following the collapse of the Austro-Hungarian empire. 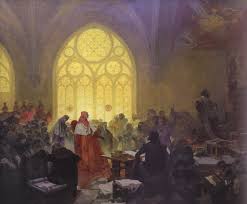 Prague has plenty of art nouveau to enjoy, so visit it as soon as you can. Check our private tours and Book them if you are ready from a day of art nouveau in the Czech capital!