Some people consider Victor Horta museum as the center of French Art Nouveau and it may be true, but there are plenty of ways to enjoy Brussels’ Art Nouveau art and architecture.

There are more than 200 examples of Art Nouveau around Brussels. You can enter shops, bars, restaurants, and even private residences that proudly display their Art Nouveau heritage. That’s why some say that there is no better place in Europe to experience Art Nouveau. Here in www.artnouveau.club we don’t do rankings because we believe that every art nouveau city has its magic.

What is certain is that the building of Tassel Hotel in Brussels (Victor Horta, 1893), the one pictured in the article, is considered by most one of the first buildings of this art movement. The building was a first major calling card for Horta, who went on to leave his mark on the capital along with the support of other great architects of the end of the 19th century and beginning of the 20th century such as Hankar, van de Velde, etc.

You can read an interesting article written by www.visitbrussels.com about the TOP 10 ART NOUVEAU BUILDINGS of BRUSSELS HERE.

Brussels is the capital of Art Nouveau and magnificent structures throughout the capital city are recognised as “world heritage” by UNESCO. If you want to see some beautiful pictures of Victor Horta’s Brussels CLICK THIS LINK (web from the Unesco).

The turn of the 19th Century into the 20th Century was a fruitful period for urban development because they were times were the rich were happy to provide funds for construction. As a result, Brussels got Art Nouveau gems that remain to this day the envy of the rest of the world.

Enjoy the reading and keep traveling! 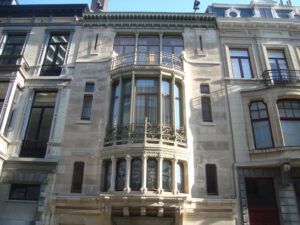