The effects of war in Ukranian art nouveau

The recent war in Ukraine has been devastating for the country and its people, but it has also had a devastating effect on the art nouveau heritage of the country. In a time of warfare, the protection of historic buildings, monuments and artwork is often neglected, and this has been the case in Ukraine. This is particularly problematic for the art nouveau heritage of Ukraine, as it is a style which is particularly beloved and is a point of national pride for the country.

The art nouveau movement in Ukraine was heavily influenced by the vibrant cultures of Europe, which were in turn influenced by the culture of Ukraine. The movement combined the traditional architecture of the region with the modernist and abstract trends of the time, creating a unique and beautiful style which has become a symbol of Ukraine‘s national identity. However, due to the current war, many of these monuments and buildings have been destroyed or damaged. This has had a devastating impact on the art nouveau heritage of Ukraine, as much of the movement‘s unique aesthetic and cultural significance has been erased.

The war in Ukraine has had a detrimental effect not just on the art nouveau heritage of the country, but also on its people. The war has caused countless deaths, and has left many people displaced and without access to basic necessities. In this context, it is understandable that the protection of historic buildings and monuments often takes a back seat to the safety of people. It is more important to save lives than art, and this is something that must be acknowledged and understood.

We talked about Ukraine and its arts in February 2022, when war in Ukraine started. CLICK HERE for more info.

About Art in Ukraine

Ukraine has a rich and long history of art, with many different styles and influences. The earliest art in Ukraine dates back to the Neolithic era, when people created pottery and other decorations for their homes. Later, during the Bronze Age and Iron Age, Ukrainian art was heavily influenced by the Scythian and Sarmatian cultures, with ornate gold and bronze jewelry, ritual vessels, and figurines.

In the Middle Ages, the dominant art form in Ukraine was iconography, which was used to depict religious scenes. Ukrainian churches were decorated with colorful icons and frescoes, which were often painted in the Byzantine style.

By the 18th century, the Baroque style was popular in Ukraine, with churches decorated with beautiful paintings and statuary. At this time, Ukraine also began to be influenced by Western European styles, such as the Rococo and Neoclassicism.

In the 19th century, Ukrainian art began to focus on a more nationalistic theme, with works such as Taras Shevchenko’s poetry and paintings which depicted the struggles of the Ukrainian people. This period also saw the emergence of the Ukrainian Avant–Garde, with artists such as Kazimir Malevich, Alexander Archipenko, and Vladimir Tatlin creating works that explored abstract and modernist forms.

Today, Ukrainian art is vibrant and diverse, and includes traditional folk art, contemporary painting, sculpture, and photography. Many Ukrainian artists have achieved international recognition, such as the abstract painter Kateryna Bilokur and the photographer Boris Mikhailov.

At https://artnouveau.club we used to sell art nouveau private tours in the beautiful Ukraninan city of Lviv, but we stopped oing so because of the war. CLICK HERE for more info. We hope to reopen this service, for the sake of peace, life and local humanity. 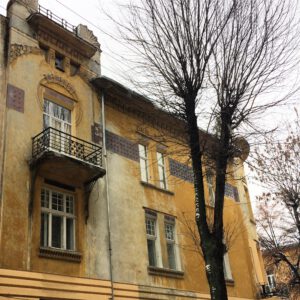 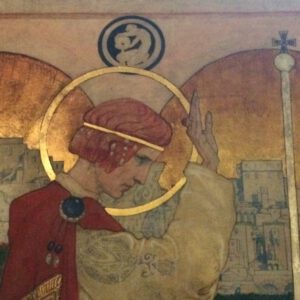 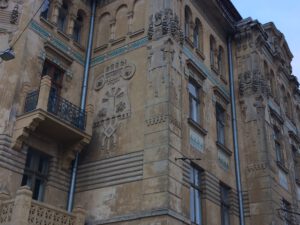 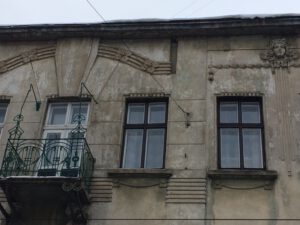 About Art nouveau in Ukraine

Art nouveau in Ukraine is a style of art and architecture that originated in the late 19th century. It is characterized by the use of organic and floral forms, dynamic curves, and asymmetrical compositions. The architecture of art nouveau in Ukraine tends to feature slender towers, curved walls, and ornamental facades. The style was popularized by architects such as Aleksandr Schusev and Aleksei Shchusev, who were two of the most prominent art nouveau architects in Ukraine. Their works, such as the Alexander Nevsky Cathedral in Kiev, are considered iconic examples of the style. Art nouveau was also popular among the decorative arts, and many pieces of furniture, metalwork, and glassware are still found in Ukraine today. The style is still popular in Ukraine and can be seen in many of its cities and towns, particularly in the cities of Kiev and Lviv.

There are other art nouveau buildings in Kyiv, like The House of Weeping Widow by architect Edward Petrovich Bradtmanu, built in 1907. The upper part of the façade displays a sculpted head of a woman, which gives the house its name – when it rains, the water, pouring down the woman’s cheeks, creates an illusion of a crying face. The building “weeps” when it is raining as tears drip on the women’s face on the facade of the building.

The ongoing war in Ukraine has made it difficult, and in many cases dangerous, to experience the country’s abundant cultural offerings. Museums, historical buildings, monuments, religious sites and libraries have been destroyed or damaged and tourism is pretty much out of the question.

That’s what makes an extensive new online showcase of Ukrainian art, culture and heritage all the more significant. The Ukraine Is Here initiative from Google Arts & Culture lets anyone, anywhere, immerse themselves in the country’s rich culture. Check this site:

You can, for example, head to Kyiv for a tour of the House with Chimeras, a unique, Art Nouveau-style mansion that hosts official presidential and diplomatic ceremonies. You can visit Unesco World Heritage sites like Saint Sophia’s Cathedral, an 11th-century monument of Byzantine and Ukrainian Baroque architecture, as well as painting and mosaic. (Fortunately, no Unesco World Heritage sites appear to have been damaged in the war yet, according to the United Nations organization.)

Almost three million people live in Kiev, making it the 8th largest city in Europe. Kiev prospered during the late 19th century Industrial Revolution in the Russian Empire, when it became the third most important city of the Empire and the major centre of commerce of its southwest. In the turbulent period following the 1917 Russian Revolution, Kiev became the capital of several short-lived Ukrainian states and was caught in the middle of several conflicts: World War I, during which it was occupied by German soldiers from 2 March 1918 to November 1918, the Russian Civil War, and the Polish–Soviet War. Kiev changed hands sixteen times from the end of 1918 to August 1920.

There are nice examples of art nouveau in several cities of Ukraine, not only in its capital city Kiev. In Russia, as in countries like Belarus, the term used for “art nouveau” is just the term “modern” which is a wider term that includes other art styles.

This house is located in str. Pushkins’ka 19, Kharkiv, the second-largest city of Ukraine. Built in 1907 by architect Alexander M. Ginzburg it was a four-story apartment building that belonged to Selivanov. On the ground floor there were shops and cafes and in the other floors apartments to rent. During the overhaul old (pre-revolutionary (1917)) workshops and stores inscriptions in German became visible. For example, “Bierhalle”. By the way, until 1899 this street was officially called “German” probably because it may have been a part of the city were people from German lived.