After years of delays, the renovation of the famous Casino in the Romanian seaside city of Constanta can now be launched according to the city mayor. The main reason for the delays were the appeals, which have blocked the process.

The Art Nouveau building has had a fascinating history since it opened as a casino in 1910. It was the hangout of Europe’s jetset. By night, royals and celebrities mingled at the poker and roulette tables, under ornate ceilings and sumptuous frescos. In the daytime, light streamed through its huge clam shell window facing out to the sea. Such was its draw that a replica was built in Monte Carlo.

Soon after the Russian royal family visited in 1914, it was converted to a military hospital with the outbreak of World War 1. A devastating bomb attack at the hospital in 1916 left 10 people dead.

By 1917 it was operating as a casino again — until the outbreak of World War II, when it was again hit by a bomb. For a short time during World War II, the building was used as a hospital.

Another blow came after the war, when Romania’s strong anti-gambling laws effectively ended its days as a casino. It operated as a restaurant under the communist regime after the war. Unfortunately, in 1990 the building was closed to the public, and it has been left sitting empty, slowly becoming more and more dilapidated.

The latest company that contested the auction took the decision to withdraw its appeal, and now the local authorities can keep on with the procedure. The fourth auction is over and finally, the contract for the restoration can be signed. Now it is expected for the casino to be rehabilitated and restored.

Former minister of development Daniel Suciu also announced that the bidder decided to drop the appeal. According to his statement, on 13th September 2019, the auction for the rehabilitation of the Casino was contested on the last day. On the same date, the company lost the case at the Bucharest Court of Appeal. On 19th December, the company also dropped the action filed with the CNSC (the National Council for Settlement of Appeals e.n.).

The estimated contract value for the restoration of the famous casino in the Romanian seaside city of Constanta amounts to over RON 110 million (more than EUR 23 million), according to development minister Vasile Daniel Suciu.

One of the most endangered heritage sites in Europe

The Casino in Constanta was built in 1910. The impressive building was designed by Swiss-Romanian architect Daniel Renard in the Art Nouveau style. For years it was the landmark of the Black Sea shore. In 2018, the Casino was included on Europa Nostra’s list of 7 most endangered heritage sites in Europe.

Unfortunately, the Casno was abandoned during the 2000s and is currently in very bad condition. Five years ago, the building passed from the Municipality of Constanta to the National Investment Company with the aim to be restored. Since then several auctions organized for the rehabilitation of the monument have been cancelled. The last auction was contested a few months ago. 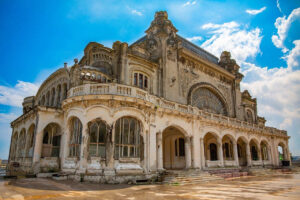